Did you noticed the name change? Wondering why? It’s a bit of a long, story it took me a while to take the time to write it down and it’s taken 18 months to decide to make it public.

Originally I sent it to around 70 people in the year and a half since I wrote it I have forwarded (on request) to at almost the same number of people as I sent it to originally. I can’t really imagine that any one sent it on to anyone else but one can’t really know that for a fact.

They say that putting something on the internet or in an email is the equivalent of shouting in a large room full of people. That may be true but if you are in a large room with a lot of people do you really take the time and energy to listen to what the shouty people are saying?

Over the course of the 18 months of sharing the following I have been told that I am brave or courageous for ‘making myself so naked’ ‘baring my soul’ ‘sharing my story’. Or that it is something that I can be proud of. I don’t feel brave, courageous, or proud. I just don’t have the same kind of social anxieties or the drive for privacy that many people have (had inculcated into them).

I need the world and the people in it to change. I can only do my tiny little bit to support and encourage that change. ‘Being the change I want to see’ means sharing honestly in the hope that it stimulates some kind of a similar response.

I had a lot of lovely replies from people who I have known for a long time, mourning the loss of their old friend Lennie. I really liked the one from my friend Jaslyn who said that she never saw or experienced me as angry but saw and liked that it was in my work…

From Lennie to Heli and Why Anyone who has known me for any length of time will know what an angry person
I have been for probably all the time you’ve known me. For a long time it was fine by me, and when people said that to progress, one needed to be prepared to release anger. I put that down to the fact that the people who said it were always either new age hippies, bourgeois, white or middle class or spent most of their time with hippies, whyt or middle class people.

When people of colour told me I put it down to the fact that they were (predominantly) whyt in their thinking (and usually skin tone). When working class people said it it was because they were upwardly mobile. Blak people would always address it differently, they would talk about how it wasn’t helpful, or how it got in the way or how it blocked forward movement.

But I felt that it was helpful to me and if it blocked forward movement I didn’t notice, great things still happened and what was it getting in the way of – the white world. I could see that in general anger in the blak community wasn’t helping us. But I constantly saw examples of blak women using their rage to progress themselves and the race.

I somehow missed that the vast majority could determine when it was no longer necessary and could set their rage to one side. Once the woman who introduced me to Nichiren Buddhism said “You LOVE your anger don’t you Lennie?” I did, I realised I genuinely loved my anger. All I knew was that, if I hadn’t got angry at a certain, very early point in my childhood I would never have survived.

The vast majority of my life I felt the opposite of wanted or welcome, and that was often at the best of times. Being angry gave me a reason to hang in there. Being angry at the things that happened to me meant I didn’t have to be sad about them. Being angry made me scary which was better than being invisible.

I even wrote a text called ‘Why Am I So Angry’ – it was generally very well received! In the past few years I’ve owned that I choose and want to spend most of my life in a predominantly whyt world it is not something that has been forced on me.

Alas in that world of my choice anger is an unaccepted medium of communication. I am working to alter the perspective as I genuinely believe the stigmatisation of anger is one of the major crippling factors in whyt wimins psychology. It took a while longer to see that being/getting angry was sabotaging lots of the things that I tried or wanted to do.

It was my first tendency, my ‘go to’ in almost any given situation. I noticed that it seemed to be the only thing lots of people had to say about me. It was clearly driving lots of (whyt) people away from me. I told myself I didn’t care and I didn’t.

Then at some point I started to care. As I hit my forties my main feeling was of being a failure, having missed so many opportunities, never fulfilled my ‘great promise’. And almost every single time I looked back with regret at an incident, the deciding factor, the thing that had caused my regrets was predominantly either anger or fear.

Finally I began to wonder if it was possible to not be angry, to develop another primary response or state. I began to acknowledge that like draws like and I didn’t want to draw any more rage into my life. The difficult part was that not being angry meant that I was probably going to spend a lot of time fearful and/or sad. Please understand that I have a fabulous life, great partner, wonderful child really cool friends, lovely people, mostly hand picked and dearly loved. My friends, my life, my family are great. I was the problem – for me!

In September 2016 I was offered a job as a telephone psychic. To be honest I only took it on because I realised that it perfectly fit the criteria for a new job, I had written down not long before. Even though I did love the cycle ride to work at the Post Office, the short hours, the anonymity/isolation and a couple of my colleagues are really inspiring people, I was after two years, struggling with the early mornings and was focussed on finding a way to do without the perks and security the job provided and I wanted plus d’argent coming in on a regular basis.

As I have done since becoming a Nichiren Bhuddist I wrote down what I wanted to chant for (manifest in my life) double the hourly rate at the PO, working from home, on the telephone at hours of my own choosing. When I was asked if I wanted to work for my boss a woman I like very much. I didn’t ask what the job was. First I asked what it paid what were the criteria and as she repeated my list to me I felt obligated to to say yes out of gratitude that it had worked out so perfectly so quickly. I then asked what it was I was going to be doing! I was fast tracked onto the line and within four days I was speaking to the callers.

After a month of answering calls and earning quite well I began to get a bit freaked – what is apsychic? What does that mean? Can I do this? Is it OK to be doing this? I had so many full on positive experiences with people. Just following my instinct, not thinking, letting my mouth go first but, the more it happened the more freaked out I got. And in truth most of the calls were irritating and often a bit unpleasant.

My hours logged on and of course my income diminished. In the January I went to see a healer in a new modality I had never heard of that promised big improvement and changes on all levels in one’s life. She basically told me that although I had consciously based the name Lennie on the last three letters of my own name,

I had taken on the name of my childhood abuser – Lennard, and in taking on his name I has also taken on a lot of his energy. She said that much of my anger was his anger and also that on a subconscious level the name was an attack on the person who had allowed and supported him instead of me, a constant reminder to that person that they made a ‘bad’/wrong/wicked choice. She told me that the name (his energy) was blocking me from moving past anger and that the easiest way to just dump a whole load of it would be to drop the name.

At first I denied it, she wasn’t having it. I literal saw a light bulb at above my heads height just in front of me with the letters Heli (Helly I’m English) over it. At the same time, I felt a weight lift from my shoulders. I understood she was right and that this was my name. I didn’t tell her but decided to check out the meaning of Heli first and if it was OK I would take that name but I kinda knew it would and realised later that I decided in that moment to do as she advised. It’s not easy, I forget all the time (as do lots of my friends) but it is really cool.

Every time I start to go into self attack, I can say “Well Heli hasn’t done anything to be attacked for.” so it’s much easier to stop myself – “that was Lennie! she’s the one who did that stupid/mean thing” Child and partner were really angry with me for a while – It took me some time to fully explained it to them. But I had to after sending the email around! I wanted them to accept the idea first and foremost because it was important to me and secondly because of the reasons.

My sister said “shit I never thought of that but it’s true, it is his name”. It’s weird how something so obvious didn’t occur to either of us. When I wrote the email I had done the basic course in Theta healing and was signed up for more! I felt so much better and there had been some key moments when my reaction was not anger. It felt amazing and even better because I only noticed after the event.

For the first time I could feel the stress hormones that staying in anger brings, the weight of it. Of course I still get angry but, not for very long and it often feels pointless. For the first time ever in my life I can actually imagine myself getting to a place where I don’t feel angry. That still feels new, exciting, fun. 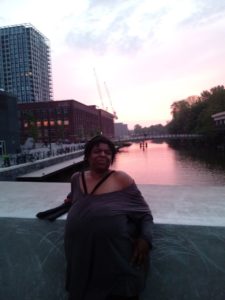